“MY BRAIN I’LL PROVE THE FEMALE TO MY SOUL”: ON SHAKESPEARE AND WOMEN My July/August column at Bookslut

In Shakespeare’s will, he left the bulk of his estate to his youngest daughter, Susanna; to his wife of 34 years, the woman who stayed home in Stratford to raise their three children while he went off to London to forge a brilliant career, he left his “second best bed.” Much scholarly ink has been spilled speculating on the meaning of this bequest — did Shakespeare despise her? Or was the bed (the second best bed being theirs, the best bed reserved for guests) meant to symbolize the couple’s enduring erotic love, a wealth far greater than any material goods? Among the myriad conjectures and revelations in Tina Packer’s fascinating new book Women of Will: Following the Feminine in Shakespeare’s Plays, one thing is certain about Shakespeare’s relationship with women both in his fantasy and in reality: it was infinitely complicated and continually surprising. Packer takes us on a journey through the life and canon, illustrating with passion and precision how Shakespeare’s attitude towards women and the feminine developed, how he strove to understand women’s perceptions, knowledge, and experiences of the world, and to recreate in his poetry and plays their “rhythms and resonances.”

Founding artistic director of the theater troupe Shakespeare & Company (Lennox, MA), Packer is also a director, actor, and teacher. The book arose from her eponymous 2010 performance piece of key scenes from Shakespeare’s plays embodying and exemplifying his evolving attitude towards the feminine. The book constitutes a superb and necessary addition to Shakespeariana.

As a young man, Packer argues, the Bard relied on preconceived notions of the feminine. In the early histories Henry VI, Parts 1, 2, 3, Richard III, Titus Andronicus, and comedies, The Taming of the Shrew, The Comedy of Errors, The Two Gentlemen of Verona, the women are either harpies or virgins-on-a-pedestal. His experience of life and art, however, gradually deepened his understanding of women until “he became one of them”; a thematic insistence that “the world would not find proper harmony if the qualities of women and men did not come into balance” culminated in his late plays.

Shakespeare was a keen observer of women’s engagement with power, given their systematic exclusion from it. Many of his plays center on a woman construing “how to acquire some or how to avoid its worst violence, how to circumvent it or how to acquiesce to it.” Especially through his exploration of love, asserts Packer, through his characters’ sexual and spiritual merging in Love’s Labour’s Lost, Romeo and Juliet, A Midsummer Night’s Dream, The Merchant of Venice, Much Ado About Nothing, Antony and Cleopatra, Shakespeare expresses the idea that “if there is an inequality of status in the lovers’ minds, then true love is not possible.” In these plays the lovers shed the idea of women as projections of men’s imagination, allowing “a new world order” to emerge.

Packer attributes Shakespeare’s transformation into a protofeminist to his intellectual and erotic attachment to the Dark Lady of the Sonnets whom she identifies (along with many Shakespeare scholars) as Aemilia Bassano, a musician, poet, and the first Englishwoman to publish a book. She was the daughter of the youngest Bassano, a family of five brothers, originally North African and Jewish, who were renowned Venetian musicians brought to the English court by King Henry the VIII. Aemilia came to court at age 18, was a favorite of Queen Elizabeth’s and mistress to the lord chamberlain, Henry Carey, 45 years her senior. Aemilia became pregnant, it is not clear by whom, and was married off to a cousin and fellow musician, Alphonso Lanyer. When Shakespeare first met her he was about to write The Rape of Lucrece, a long poem, which, writes Packer, “took on the violation of women with an understanding, an empathy not witnessed before in his writing.” Lucrece’s account of the effects rape had on her body and mind, her expression of rage, shame, doubt, and grief was a breakthrough for both the Bard and for literature — and Packer credits Aemilia.

A non-aristocratic woman at court, Aemilia was well aware of how women’s bodies were bought and sold, used as a means of advancement, or if “sullied” could reduce her to nothing. A fierce champion of the female sex, in her poetry Aemilia defends Eve’s picking of the apple and insists women stop being punished for Eve’s “sin.” She sings the praises of history’s great women — Cleopatra, Deborah, Esther. She exclusively sought the patronage of women and wrote several poems to powerful women of the day. Through knowing her — an outspoken, funny, talented, quick-witted, sexually passionate woman (think Beatrice, Rosalind) — “Shakespeare,” Packer asserts, “was finally giving to women voices that belonged to women.” 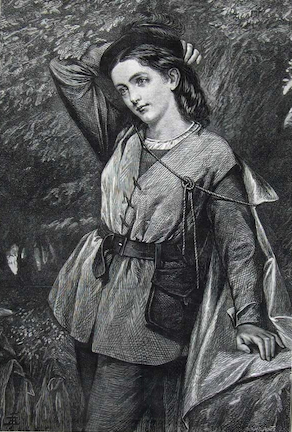 in Cymbeline) was the catalyst, with The Rape of Lucrece followed by Romeo and Juliet, Shakespeare began to explore his female sympathies in his art with increasing subtlety and success. As if announcing Shakespeare’s intention, Richard II declares:

My brain I’ll prove the female to my soul,
My soul the father, and these two beget
A generation of still breeding thoughts;

Placing the male and female soul in absolute parity, notes Packer, was a radical idea in Shakespeare’s time, when, according to the Bible and popular belief, women didn’t have souls themselves but relied on their father’s or husband’s. In a pivotal scene in Much Ado About Nothing, Benedick decides to renounce honor between officers, defy the old boy network, and take on the voice of women by supporting Hero’s, and Beatrice’s, cause:

“Think you in your soul the Count Claudio has wronged Hero?” Benedick asks Beatrice.

Legally and socially, women had almost no voice, so if the world was to become a better, more just place, Shakespeare suggests, men must speak up for women and help redress the imbalance. Above all, he shows how Beatrice and Benedick are challenged by each other and together are capable of being a great force for joy and good.

In Antony and Cleopatra, Shakespeare moves the concept of spiritual equality out of the private sphere into the public. He imagines a world in which there is real political and social equality between men and women in progressive Alexandria, where women enjoyed equal rights, and where education and the arts were of supreme value (see Stacy Schiff’s Cleopatra: A Life, reviewed by the Bombshell here). Packer wonders what the Western world might be today if Antony and Cleopatra had survived the Roman onslaught. Instead of women being expected to model themselves on the silent, subservient, Virgin Mary, our example of sublime femininity could have been the verbally brilliant, effective, and ardent Cleopatra. Antony was not frightened by Cleopatra’s feminine power, but excited and inspired by it, remaining so over their many years together. As in Romeo and Juliet, the force that allows the couple’s mutual enlightenment is their mingled spiritual and erotic love.

Packer also looks at the abundance of gender switching in Shakespeare’s plays. By embracing the “other,” these women find new, powerful selves that allow them, and us, a deeper understanding of the world we live in. She sees Ophelia, Desdemona, and Cordelia as women who risk publically speaking the truth and die for it — a phenomenon that persists today from trolls on the internet harassing outspoken women to the attack on Malala for defending a girl’s right to an education. Packer also rightly emphasizes that “the patriarchal structures of honor, shame, violence, and might is right do as much harm to Hamlet, Edgar, Lear, Coriolanus, and Hector as they do to Ophelia, Desdemona, Lady Macduff, Hero and Juliet, Ariel and Miranda.” She discusses Hamlet’s feminine qualities. She considers the consequences when women such as Gertrude, Goneril and Regan, Lady Macbeth, and Volumnia seek power by denying themselves and using their considerable energies and intelligence to promote the male power structures: all hell breaks lose. In Coriolanus and Timon of Athens, worlds without women, civilization crumbles into utter despair. And in the late plays, Pericles, Cymbeline, The Winter’s Tale, The Tempest, Packer discusses how, in illuminating the artistic process itself, Shakespeare linked creativity and the ability to bring life out of death to the feminine.

We will never know if Shakespeare ever laid eyes, or lips, on Aemilia’s mole, nor if his gift of the “second best bed” to his wife was a posthumous slight or loving caress. But what Packer’s book beautifully affirms is that the Bard has bequeathed to all of us a world of wondrous — and real — women.

See the column here at Bookslut

4 responses to ““MY BRAIN I’LL PROVE THE FEMALE TO MY SOUL”: ON SHAKESPEARE AND WOMEN My July/August column at Bookslut”