If things truly come in waves, we seem to be riding a Gertrude Stein tsunami. Recent Stein events and books include:

— “The Steins Collect: Matisse, Picasso, and the Parisian Avant-Garde” (The Metropolitan Museum of Art, February 28-June 2). This extraordinary show presents paintings collected in the early twentieth century by Gertrude Stein, her brothers Leo and Michael, and Michael’s wife Sarah and displayed at their weekly salon at 27 rue de Fleurus. Visually demonstrating the family’s significant effect on modern art, the curators have astonishingly managed to convey on multiple levels the compelling concept of how art — collecting, promoting, and creating it — is used to seek power within a family. 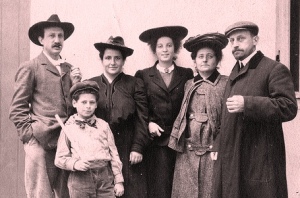 and Stanzas in Meditation: The Corrected Edition

, both books beautifully considered in last month’s issue of Bookslut by Elizabeth Bachner.

delineates the deep biographical and artistic connections between Stein and fascism. 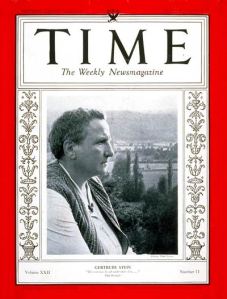 — Finally, the oceanic tremor of a book and harbinger of the Gertrude Stein tidal wave, Janet Malcolm’s Two Lives: Gertrude and Alice

My adventures navigating this Steinian wave began with Two Lives, a book I was drawn to more out of my interest in Malcolm than in Stein. The book’s title, I discovered, is misleading. The story is less about the literary world’s most fascinating couple and more about Malcolm’s struggle to understand the seriously enigmatic life and work of Gertrude Stein, the mother of modernism and as such a Mother of Us All. Malcolm’s enticing account of her own journey into that formidable, apparently inaccessible country — call it Steinlandia — with the marvelous triumvirate of Stein scholars, Ulla E. Dydo, Edward M. Burns, and William Rice, as her Virgil, allows her readers to follow vicariously up and down all sorts of Steinian alleys, at once surprising and mundane. Click here to read the rest of the column at Bookslut. 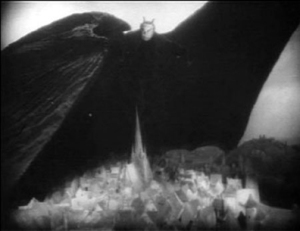 Back to the Future? The Golem, Faust, The Seashell and the Clergyman

And even more on silent film from an earlier post in that era known at BTA (Before The Artist) when the film was barely a blip on the cinematic radar: Silent Films Redux: Underground, Dr. Jekyll and Mr. Hyde, The Light of Asia…