The Scarlet Empress, The Iron Lady, and My Cab Driver

Since the phenomenon of women in power is still rather rare, inevitably we develop a fetishistic relationship to those exceptional women who do somehow manage to rise to the very top of the political ladder. We regard these women as at once bewitching and bewitched, and they arouse in us the tantalizing dread of being eaten alive. One of my favorite renditions of our convoluted eroticization of female power is Joseph von Sternberg’s 1934 film The Scarlet Empress in which the sublime Marlene Dietrich plays Empress Catherine II of Russia. At the Court of Elizabeth I in St. Petersburg, amid glowering gargoyles, magnificent ball gowns, and astounding opulence, the innocent Prussian Princess Sophia discovers that her predilection for frivolity is matched by a lust for power. She uses her devastating beauty, charm, sexual appeal, wit, and intelligence to ruthlessly get on top and stay there, where she will exert absolute power as Catherine The Great.

A less visually phantasmagoric but equally perverse vision of female political power is presented by The Iron Lady, starring the venerable Meryl Streep as British Prime Minister Margaret Thatcher. The screenwriter and director (both women) mostly show Thatcher (respectfully dubbed the “Iron Lady” by the Soviets) as a demented old crone carrying on a hallucinatory relationship with her insidiously judgmental dead husband. In the flashbacks to her ride on top, we are barraged with a gloss of footage displaying the mayhem that occurred under her watch (miners’ strikes, IRA attacks, the Falklands war, etc.). Thatcher ultimately lost power, the filmmakers would have it, due to a hysterical outburst at a meeting during which she humiliated her all-male cabinet in a harpyish diatribe, accusing them of being cowardly, imbecilic, and weak. Undoubtedly some version of this scene could have actually taken place, but I object to the assertion that Thatcher’s feminine wiles brought about her downfall. The biopic did not provide me with any particular insight into the character, much less the policies, of the infamous PM, but I was, nevertheless, weirdly entertained. 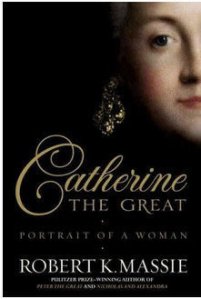 Recently, I was wonderfully entertained — and edified — by reading Robert K. Massie’s new biography Catherine the Great: Portrait of a Woman. The Pulitzer-prize winning author of Peter the Great, Nicholas and Alexandra, and The Romanovs seeks in myriad ways to de-fetishize Catherine by placing her extraordinary rise to power within a full context, providing a nuanced geopolitical history of eighteenth-century Russia along the way…
Read the rest of the column at Bookslut 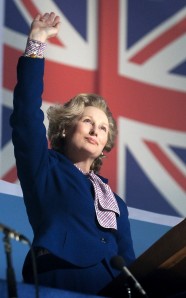